Another Day at the Park

Parks are where it is at. At least that is what Jack and Adrianne tell us. We have found living overseas that American’s are a little more concerned with safety than the rest of the world. You will often see Japanese people on mopeds with their helmets around their necks which seems to be way less comfortable than actually wearing it on their head.

We discovered a park on the way to base in the fall and have made probably 10 trips there since then. One of the most fun and scary parts at the same time is the 20 foot long, 50 foot wide all cement slide. It’s crazy enough for me that I get that funny little feeling in my butt before I take off with Jack or Adrianne. (It’s a good thing my grandparents can’t read the internet.) I took 20 students there one time and it was crazy. In America it would be a lawsuit waiting to happen. In Japan, it’s just another day at the park. 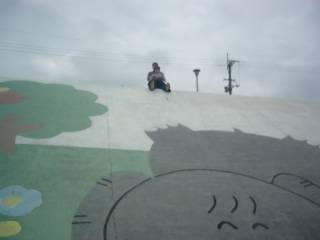 One Response to Another Day at the Park