Yesterday I was taking Jack and Adrianne on a little adventure. Just after we left the house I heard a Japanese siren. That is kind of unusual since often when the cops are trying to get somewhere they turn on their lights but leave their siren off. Our new van has a subwoofer in the back and we were listening to loud Christian rock and roll (Adrianne’s favorite) so the siren sounded like it was coming from some distance away. After a few seconds I realized the cop was right behind me. I had zero fear that he was pulling me over since cops will watch drivers speed through red lights and do nothing about it and to my knowledge I had not broken any traffic laws.

Another odd thing about Japanese emergency vehicles is that they often don’t expect the other vehicles to pull over and let them by. That is something that just grates on me as a driver who mostly grew up in America. We were in traffic and practically stopped anyway so I pulled over and waved them around me. Since they were right on my bumper I don’t even know if they knew I was waving them around and they made no attempt to get around me. At this point it occurred to me that maybe, just maybe they could be pulling me over.

I pulled off the road into a parking lot and the cops followed me in. There was no waiting while they checked my license plate or anything and seemingly before I had the van in park they had run up to my window.

The senior cop yelled at me, “You turn right!”

“Well, I am pretty sure I turned left.” I replied.

“You turn right.” He yelled again.

“I guess.” I said meekly. Knowing I had turned left but not wanting to argue with him.

“You turn right.” He said one last time.

I just shrugged my shoulders.

He was getting more frustrated so he had me get out of the van and go to the back and pointed at the brake light. He went up and pressed my brakes. For some reason my brake lights are a light pink and when the brake pedal is pressed they are rather bright, almost like a flash light shinning into your eyes. He came back and communicated in body language by turning his body and throwing up his hands in front of his face that the lights were so bright they were blinding.

It was then that I realized “You turn right.” Meant “Your turn light” which really meant. “You’re brake lights are so bright I can’t see a stinking thing.” So I need to make a trip to the junk yard and fix my “turn right.”

By the way. The kids and I survived fabulously while Jen was away at the woman’s retreat but we were oh so glad to have her back. 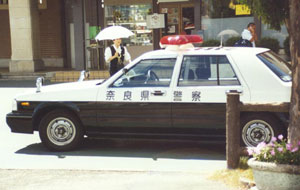 Posted under Uncategorized
Comments Off on You Turn Right.