Bailey is the student on the left and has been doing an awesome job this trip of serving others, jumping into everything whole-heartedly and loving others. I asked her to share her story about last night with you. 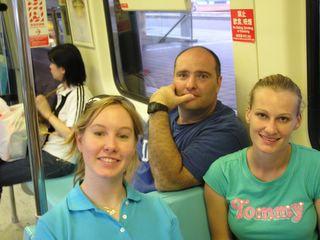 Hello my name is bailey and on the 21 of June I lead a Taiwanese girl named Candy (her chosen name) to the Lord. I was down on the street trying to speak “Free drinks and free English” in Chinese to the people walking past me. Then Candy and her sister Jennifer walked by. I told them the Chinese phrase, (that I stated) they were reluctant at first, but I continued to say, “Free, yes free.” So, they went inside and we sat down together in the crowded room. I served them the drink of their choice. They couldn’t speak much English so I tried to find a translator. It took quite a while for the translator to come, so I was stuck their trying to communicate. I learned to basic stuff, like what there names were, where they go to school, and how old they were. I asked them weather they went to church or not but they didn’t understand. When the translator (Fang Hue < sounds like this, kind of) came I learned that Jennifer had gone to a youth group activity in her school, but still did not believe in Jesus. Her sister Candy had not heard the gospel before, so I shared with her that Jesus loves her, created her, that everyone is a sinner including her, that because of Gods love he sent his son to die for our sins and to create a brig to heaven. Then I asked her if she believed this. She said yes, then I confirmed her answer and expressed that if she believes this than that means she could not worship other gods. She understood and wanted to pray to God and accept him into her heart. So we all bowed our heads and prayed. It was very interesting because I would speak, then Fang Hue would translate, then Candy would repeat what Fang Hue said. After the prayer we gave her a bible and showed her a good passage on not worrying about tomorrow. Then she and her sister had to leave because on the time on night. That is the end of my story. If you would like, keep Candy in your prayers, for her growing relationship with God. That would be wonderful. Thank you for your time. Bailey Paschall

Posted under Uncategorized
Comments Off on Candy comes to Christ